A Flight to Hawaii with Scoot Bz

We went to Scoot’s check-in counter 3 hours before our boarding time. We had business class tickets, so we were able to check-in quickly. I requested a wheelchair service for my mother when I made a reservation, but the wheelchair they offered was JAL’s wheelchair for some reason. The staff who pushed the wheelchair for us from the gate to the boarding gate was also the staff of JAL. Maybe, Scoot is entrusting the wheelchair service to JAL. And luckily, the terminal was also Terminal 1, the same as major airline companies! My mother wanted to buy some stuff that her acquaintance asked for in KIX’s duty-free shops, so I pushed the wheelchair for her to go shopping, and then we headed for the gate. They let us go through the priority lane at both the security check and the customs clearance, and we didn’t have waiting time at all.

Scoot, an LCC company based on Singapore Changi Airport, their flight attendants’ smile was super great! All the staff was always smiling, they came to us right away when we call them, and they were really bright and kind. But it’s LCC. Although we had business class seats, we had to pay for everything except water in a plastic cup. When I asked if we can borrow a blanket, they said that it costs about S$15, so I didn’t borrow it. Earplugs were also S$2 for a set. Of course, we had to pay for the meals too, so I ordered the food together when I bought the ticket. However, since it was a very easy meal, it seemed like we were able to order it whenever we want on the plane.

About the business class seats, we were able to have seats in the very front row when we go to Hawaii, and we had enough space in front of us. But when we come back to Japan, the seats weren’t in the front row, and when the passengers in the front and the back recline their seats, it felt a little cramped.

However, we were able to fly with half the price of business class seats at major airlines, and the flight attendants offered us good service with great smiles, so my mother and I were really satisfied flying with Scoot. 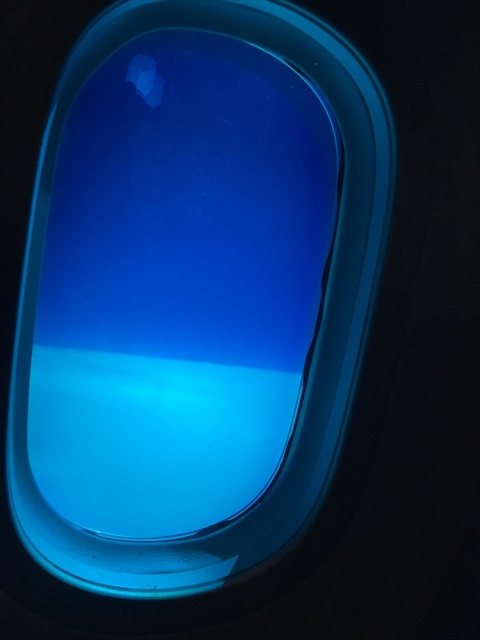 When we arrived at Honolulu International Airport, we had the wheelchair service again. We went to immigration with a family who had a child using a wheelchair. The airport shuttle bus and the private elevator, they smoothly guided us through the priority routes and took us to the exit in a short time. It was absolutely difficult for me to move around in the big Honolulu Airport by myself, so I was very glad for their service.

For the transportation from the airport to Hilton Waikiki Beach Hotel, I made a request in advance on a website called “Traveloco” where Japanese people living abroad (Locos) in 2,352 cities all around the world are registered. I found Traveloco when I was just browsing on the Internet. It’s a very convenient service where you can ask several Locos that offer tourists to pick them up or guide them at sightseeing places. You see their profiles, contact them with a private message tool in Traveloco, and ask for the actual service to the person (Loco) who you like. I asked one of the Locos to drive between the airport and the hotel and asked another Loco to guide us on the second day for sightseeing in Honolulu. This service was very useful, and I really liked it. I’ll write more in another article, Hawaii Trip with My Mother (A Trip of Great Encounters DAY-2), so please look forward to it!

When we get out of the Honolulu Airport, the Loco was waiting for us with a white Lincoln car and took us to Hilton Waikiki Beach Hotel. We did early check-in and went to our room on the 29th floor. There was a beautiful view from our room’s window. The rainbow in Hawaii welcomed us! 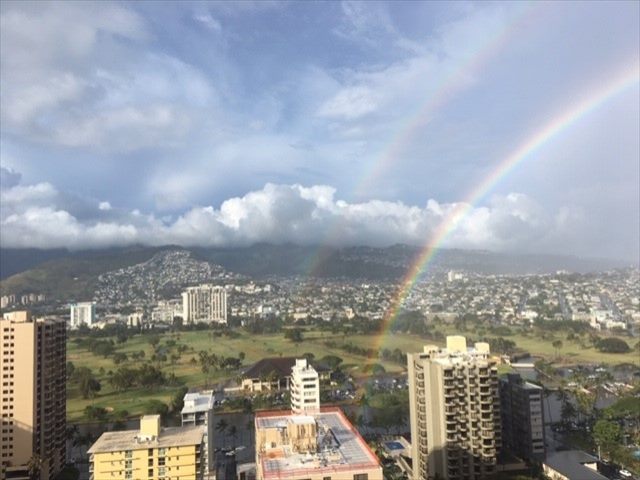 We Had the Famous Pancakes at a 24-Hour Operation Restaurant That Is Rare in Hawaii, M.A.C. 24/7

Both my mother and I couldn’t sleep on the plane, and we had jet lag, but we went to the restaurant in Hilton Waikiki Beach Hotel after check-in to have some food. Before I carefully look at the menu, I found the famous pancakes of this restaurant which I researched beforehand. It was a super huge 3-layered-pancakes with a diameter of 31cm, and it would be free of charge if one person can eat them all within 90 minutes. We both had jet lag, and we didn’t feel like eating a lot, but we had no idea why we were about to order some pancakes. Anyway, we ordered a smaller pancake (from $12). There were some choices, and we asked the server which one is their recommendation. The server said that the one with several kinds of fruits on top is good, so we ordered that one. But, she brought a pancake with chocolate chip topping. It seemed like the server realized that she made a mistake when she brought that to our table, but she laughed and said something like, “I made a mistake.” and left our table without changing it. 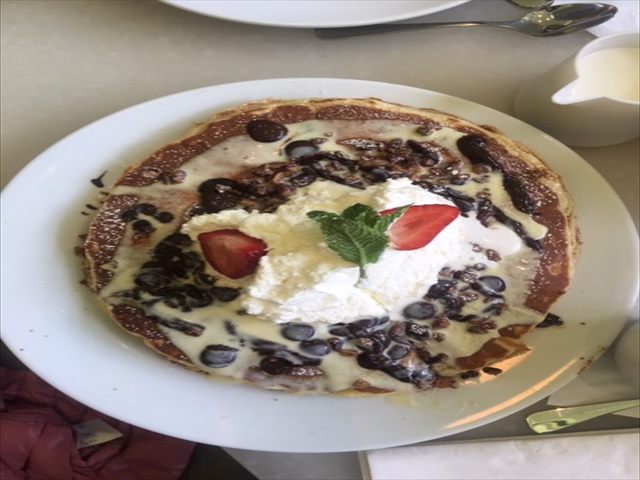 We had the famous pancakes at M.A.C. 24/7 which is a rare 24-hour operation restaurant in Hawaii

When I was watching the courtyard of Hilton Waikiki Beach Hotel from the restaurant, some strange birds were playing on the grass.

Some birds were playing on the grass in the hotel courtyard. It looks like a figurine.

After lunch, we went to the reserved Hawaiian Lomi Lomi Massage that comes with a transportation service. I don’t really like massage, so only my mother had it. She said that it was absolutely great. Kuub Cosmetics was on the 37th floor of Century Center, and the view from there was fantastic. 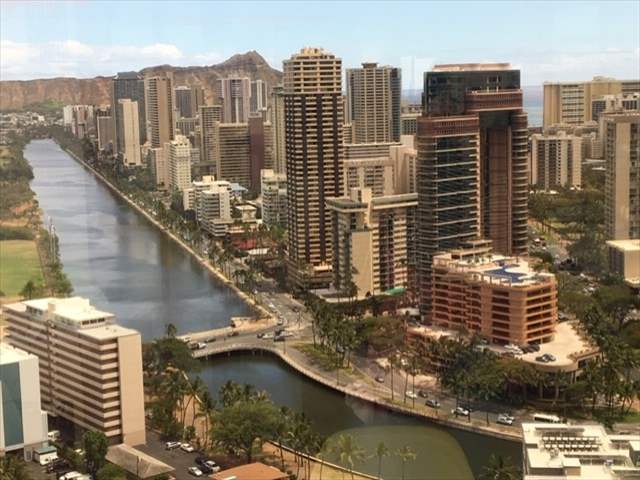 Went to Kuub Cosmetics for Hawaiian Lomi Lomi Massage. The view from the 37th floor was wonderful. 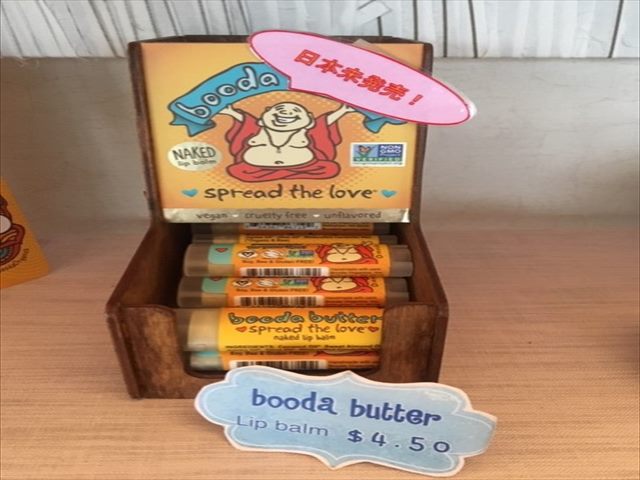 I bought a booda butter lip balm for a souvenir.

Dinner in Waikiki Beach at Night

It was about 5 minutes by walk from Hilton Waikiki Beach Hotel to Waikiki Beach. We had dinner at the restaurant watching the sunset of the beach. 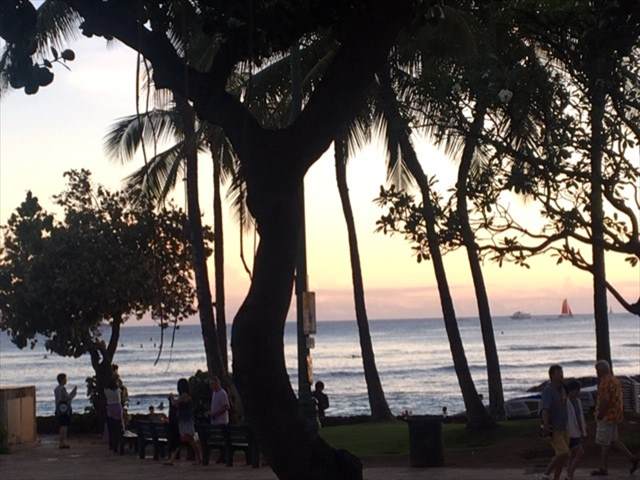 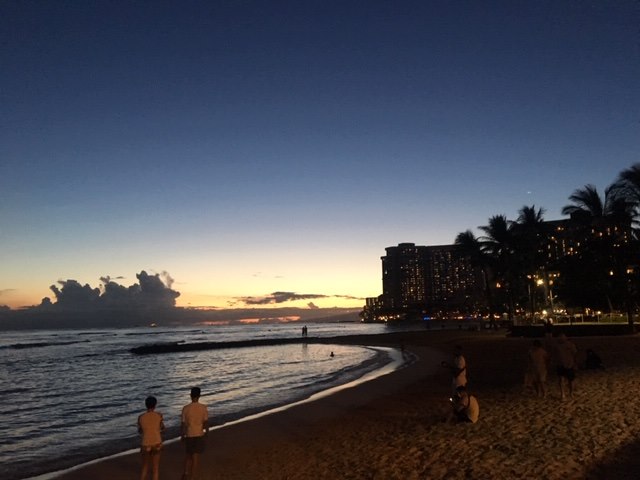 Watching the sunset at Waikiki Beach

We came back from the beach to Hilton Waikiki Beach Hotel, and while we were buying a pet bottle water at the store and boutique in the hotel, someone talked to us in Japanese from our back. When I looked back, there was a very beautiful lady standing in the store and spoke to us very kindly. This lady was Emi the legend. And from this day until we go back to Japan, Emi invited us every day to have some tea and fruits at her store, and we had a great time with Emi.

The First Year of Reiwa, Hawaii Trip with My Mother (A Trip of Great Encounters DAY-2)
Between the trees, a scenery suddenly opened in front of us, and my mother and I both shouted “Wow!” Waimanalo Beach, Such a Beautiful Place That Was Difficult to Describe in Words.

ANA’s Wheelchair Support Was Very Helpful on the Trip to Hong Kong with My Mother!

My mother and I went to Hong Kong. Before the trip, I suggested my mother many times to buy a wheelchair to take it to our trip, but she said that she wants to walk on her own feet as much as she can, and she didn’t want to rely on a wheelchair yet. So, I made an easy plan, and we didn’t take a wheelchair on the trip.
2019.05.06

Trip to Hawaii with My Mother

We Got an Accommodation Voucher by Answering Hilton Grand Vacations’ Timeshare Questionnaire!
2019.05.13

The articles about the 3-day trip in Hawaii are written in a series. DAY-1, DAY-2, and DAY-3, they are divided into 3 articles by the day of our stay. This article writes about DAY-2, “The First Year of Reiwa, Hawaii Trip with My Mother (A Trip of Great Encounters DAY-3).”
2019.09.16

The Second One of “Three Major Spanish Resort Hotels That I Want to Stay,” Shima-Chichukaimura Has Doggy Suite, and It’s a Great Little-Known Spot!

The Second One of “Three Major Spanish Resort Hotels That I Want to Stay,” Shima-Chichukaimura" Has Doggy Suite, and It’s a Great Little-Known Spot!
2019.04.13

The Third One of “Three Major Spanish Resort Hotels That I Want to Stay”(Hotel Shima Spain Mura), and I Finally Went to All of Them!

I chose 3 accommodation facilities under the theme of “Three major Spanish resort hotels that I want to stay.” This time, I stayed in the third one, Hotel Shima Spain Mura. I finally went to all of the “Three major Spanish resort hotels” that I chose!
2019.04.19
スポンサーリンク
Trip to Hawaii with My Mother
The First Year of Reiwa, Hawaii Trip with My Mother (A Trip of Great Encounters DAY-2)