The Second One of “Three Major Spanish Resort Hotels That I Want to Stay,” Shima-Chichukaimura Has Doggy Suite, and It’s a Great Little-Known Spot!
Feeling Like Hepburn With a Choker, Romantic Fashion Style in Autumn and Winter
The days Rinse and I spent together with only two of us is my precious memory now.
I’m Looking for a One-Shot Girls’ Manga, and I Think It Appeared in “Ribbon”
Six-panel-comics-AI-chan 3 “Each Start of New Life”
Looked for a Perfect Grave of My Beloved Dog
Six-panel-comics-AI-chan 9 “Coming Back to Daily Life”
Showed the video “The Story of My Family and Our Beloved Dog” at Veterinary Grief Care Forum For Pet Owners in Kyoto
Six-panel-comics-AI-chan 12 “Dog Park”
A Letter for My Dearest Rinse After a Month Since Her Death
This was the story of a small dog that kept watching the bonds of a family (Episode 1)
ANA’s Wheelchair Support Was Very Helpful on the Trip to Hong Kong with My Mother!
Trip to Hawaii with My Mother
There Used to Be Animal Quarantine Mooring for One Month When Entering Singapore
Six-panel-comics-AI-chan 5 “A Walk”
Pet’s 3D Figure Maker Introduced by NHK, My Order Is Currently on Progress
The Third One of “Three Major Spanish Resort Hotels That I Want to Stay”(Hotel Shima Spain Mura), and I Finally Went to All of Them!
Practicing Filial Piety Is Training, Just in My Case, Though

We Got an Accommodation Voucher by Answering Hilton Grand Vacations’ Timeshare Questionnaire!

When I went to Okinawa with my mother during the summer vacation in 2018, at the departure gate in the airport, there was a campaign by Hilton Grand Vacations’ timeshare which gives out a prize of accommodation voucher in Hawaii by answering a questionnaire. It was just before flying to Okinawa, and my mother and I were both excited. So, we thought it sounds like fun and went to the booth, and answered the questionnaire to give it a try. But at that place right away, we won the accommodation voucher in Hawaii under the condition of participating in a timeshare explanatory meeting on later days.

So later, I went to the meeting by myself. At the place, each participant had one of the staff to explain the details about it in a private room. I saw a video and listened to dream-like stories, and it was very interesting. But I’ve never been to Hawaii before, so I wanted to see how wonderful the place called Hawaii is on my own eyes where many people praise.

The picture below is the model of the Hilton’s new timeshare, “THE GRAND ISLANDER” shown at the explanatory meeting place. It was beautiful! 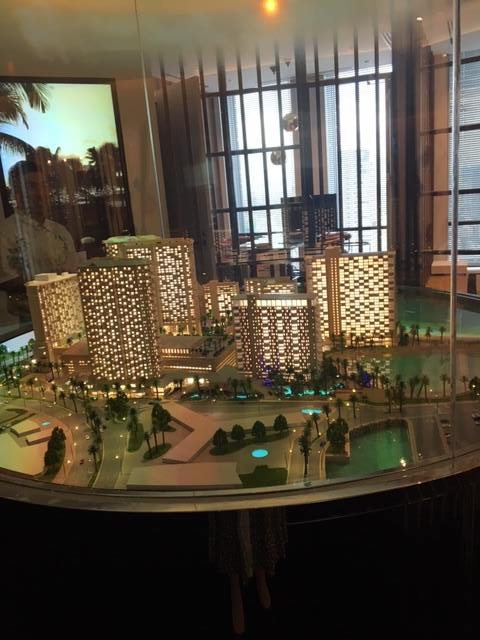 At the explanatory meeting of Hilton Grand Vacations

On this project, there were two choices. One was staying at the real timeshare room in Hawaii and participate in a local explanatory meeting, and another was staying at one of the Hilton hotels, but we can’t choose which hotel to stay. It was a difficult decision, but this time, I’m going with my mother, and I thought it would be tough for my mother to walk around the big site where gorgeous timeshare rooms are. So, I chose the Hilton hotel invitation near Waikiki which is convenient to go shopping. However, we had to make a reservation of the hotel within 60 days; otherwise, this accommodation voucher will be invalid. We can make a reservation of an international flight about a year before, so I decided to go during the summer vacation next year and tried to reserve a ticket. But one concern I had in my mind was that economy seats would be tough for my mother because her legs aren’t so good and it’ll take about 8 to 9 hours to Hawaii even by a direct flight. However, the ticket price will be tremendously high during the Obon Festival season, even higher for business class seats in all the airlines. So, I thought of an idea of booking business class seats of Singaporean LCC “Scoot” that has a direct flight from Kansai International Airport to Hawaii. I made a business class reservation with Scoot that is about half the price of major airlines, departing on August 12 from KIX and coming back on August 15 from Hawaii.

An Unexpected E-mail from Scoot: The Flight for August 12 KIX to Hawaii and August 15 Hawaii to KIX Is Cancelled

At the end of January 2019, I unexpectedly received an e-mail from Scoot that says they will stop the operation of a round-trip flight of KIX and Hawaii. The subject was “[IMPORTANT] Cessation of Scoot KIX-HNL and HNL-KIX flight: IMPORTANT INFORMATION ABOUT YOUR FLIGHT” and it said that Scoot would completely stop the flight operation between KIX and Hawaii from June 1, 2019. There were three choices I can take for this issue.

1. Change the flight date of KIX-Hawaii to before June 1 without any additional charge

3. Change to Scoot trip ticket (6 months valid) with the value of 120% refund

All the choices didn’t sound good to me. There was just my mother’s disappointed face in my mind. But there was nothing I can do to it, so I called my mother and told her to think of somewhere in Japan to go together instead. I think my mother was disappointed, but she didn’t express that to me and simply said OK. But a few days later, I got an idea. I decided to give a try and ask Scoot whether we can change the flight during Golden Week in May. Scoot is a subsidiary company of Singapore Airlines, and I have a Singaporean friend who has a daughter working as AD of Singapore Airlines, so I asked her to inquire to Scoot if we can change the reservation.  And luckily, there were seats available.

At the time, I didn’t truly realize that, but for those reasons, my mother and I spent our time in Hawaii at the moment when the era name in Japan changed to Reiwa.

I’ll continue and introduce my story in the article later as Hawaii Trip Report Part 1,2, and 3 including our experience staying at Hilton Waikiki Beach. Please look forward to it!

The First Year of Reiwa, Hawaii Trip with My Mother (A Trip of Great Encounters DAY-1)

Scoot, an LCC company based on Singapore Changi Airport, their flight attendants’ smile was super great! All the staff was always smiling, they came to us right away when we call them, and they were really bright and kind.
2019.05.24

The Third One of “Three Major Spanish Resort Hotels That I Want to Stay”(Hotel Shima Spain Mura), and I Finally Went to All of Them!

The First Year of Reiwa, Hawaii Trip with My Mother (A Trip of Great Encounters DAY-2)

Between the trees, a scenery suddenly opened in front of us, and my mother and I both shouted “Wow!” Waimanalo Beach, Such a Beautiful Place That Was Difficult to Describe in Words.
2019.06.03

The articles about the 3-day trip in Hawaii are written in a series. DAY-1, DAY-2, and DAY-3, they are divided into 3 articles by the day of our stay. This article writes about DAY-2, “The First Year of Reiwa, Hawaii Trip with My Mother (A Trip of Great Encounters DAY-3).”
2019.09.16

Practicing Filial Piety Is Training, Just in My Case, Though

Hikaru Utada was looking back over her past and telling that she had kept on messed with by her mother’s unpredictable words and behavior.
2019.03.21
Sponsored Link
ANA’s Wheelchair Support Was Very Helpful on the Trip to Hong Kong with My Mother!
The First Year of Reiwa, Hawaii Trip with My Mother (A Trip of Great Encounters DAY-1)